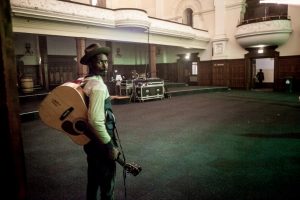 Two time SAMA nominee Bongeziwe Mabandla made waves overseas in 2014 with his perfect blend of Urban-African Folk. His heartfelt lyrics and honest delivery has seen him take to the stage in Germany at Africa Festival and at the renowned Primavera Sound Festival in Barcelona in June 2014.

Locally he had the opportunity to perform with both Joss Stone and Vieux Farka Toure’ on their South African tours.

Ticking off the continents he found himself in Japan for Sukiyaki Meets the World Festival, North Korea, the United States to take part in One Beat, an incubator for music-based social entrepreneurship, Australia…

Bongeziwe displayed all the signs of a passion for art and music from an early age, and developed his own unique unplugged style and earned recognition as a musician. Together with his band, Bongeziwe has created a matchless Afro-folk sound, over which his soulful voice delivers in both Xhosa and English.

Bongeziwe’s debut album Umlilo has garnered critical acclaim, giving him two nominations at the South African Music Awards 2013, for Best Newcomer and Best Adult African album categories. Bongeziwe was also allowed the privilege of performing live at the SAMAs, and he provided a moving performance of ‘Ngawe Mama’, which was broadcast across the nation.