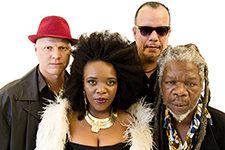 The band released their debut album “In Waves” in 2012 and is currently recording their second album in Mozambique. They have also released two singles since In Waves and are launching a new single “Running” Ft King Gibbs in Feb 2016. Black South Easter have toured South Africa and Mozambique regularly for the past 4 years and take pleasure in bringing diverse people together with energetic live performances. They have shared stages with many legendary local and international artists.