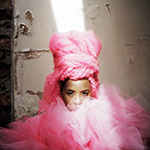 Now and then it’s easy to guess that Blk Jks, from Johannesburg, are an African band on their four-song “Mystery EP”. That’s when they go bounding into three-chord South African township grooves in “Lakeside” or overlay the reggae foundation of “Summertime” with syncopated guitars. But Blk Jks make their music in a global swirl of possibilities; they are an art-rock band…While the lyrics (mostly in English) ponder philosophical quandaries — “All the wise men ’round the world don’t know the answers” — the band’s quick-fingered, multilayered vamps well up out of murky echoes, piling jubilation atop the anxiety, before submerging again.

Soweto-born singer and songwriter Elo recently came out with her first single “Stare,” a promising and nostalgic statement about self-acceptance built on a pumping bass progression and shimmering guitar lines. “[‘Stare’]… reminds me of myself when I was carefree, sometimes reckless yet still choosing and loving myself,” she explains. The electro-pop track is carried by the newcomer singer’s hazy R&B-influenced delivery and production work from BLK JKS drummer Tshepang Ramoba.