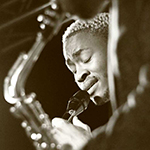 Kevin and the Love World Band Consists of 5 members mainly Kevin Maduna (Band Leader /vocalist), Grace Makhetha (Bass), Thato Leputu (Keyboards/Paino), Obakeng Mabitsela (Drums) and Khutjo Nkwana (Saxophist). The band was formed and established in 2013 by Kevin Maduna who teamed up with Thato Leputu. In 2014, Kevin and The Love World Band participated in a jazz band competition organised and funded by the Department of Arts and Culture which gave them a great opportunity to perform on great platforms like the Standard Bank Joy of Jazz, Moretele Park, Macufe to mention a few. In 2015 and 2016 the band released its singles titled Man Down and Luphelile. They journey on to spread love through the pop jazz sound.