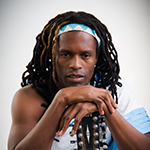 Ndyebo is a traditional Afro Soul artist who writes and sings his songs in isiXhosa. His songs come to him inspired by dreams he has which he then interprets into song with powerful messaging as witnessed in his upcoming debut album titled “Ibuyambo” which means the Renaissance. He is a self taught singer songwriter and acoustic guitarist originally from the Eastern Cape now based in Joburg.