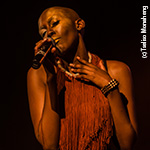 Reigning from the mountain kingdom of Lesotho, Leomile is a singer-songwriter whose music ensnares all who encounter it with its blend of curious mysticism, modern sound and storytelling. Leomile’s music is infused with lyrics that address important issues of identity and womanhood wrapped in soulful music with a funky-jazz edge. 2016 saw the rise of Leomile with the release of her debut album “PULA_MOLOMO” and her continued appearances at high profile shows such as the National Arts Festival in Grahamstown and the Standard Bank Joy of Jazz. She has become a regular feature within the Johannesburg music scene playing Basha Uhuru music festival and headlining Soweto Arts and Craft Fair, Heart 2 Art at the Johannesburg theatre and many more. Nominated for 3 awards in 2016 including “Album of the year” and “Best newcomer” at the biggest awards show in Lesotho, the “Ultimate FM Music Awards”, she is gaining impetus and continues to hypnotise audiences.