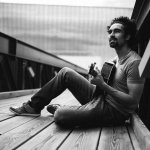 Tias’s music is deeply rooted within his humanist values and is always travelling in order to find new ways of singing. Tias was born in 1981, on Reunion Island, and he has always been creative. He was influenced by Simon and Garfunkel, Tracy Chapman, Brel’s or Brassens’s lyrics. As soons as he listened to his first tapes by Genesis, Dire Straits, or Goldman and Cabrel’s concerts, he had the desire to belong to this big and fascinating family.

His first steps with a guitar enabled him to create his first lyrics that he recorded on an old recorder. He studied on main land in order to strengthen his roots. The Creole and Maloya languages integrated music in French and English. Tias’s project was born. In 2005, he became a primary school teacher and kept writing a lot and imagining artistic projects for his pupils.

His own creations were heard in the 20th arrondissement in Paris. Then he was spotted by Direct 8 TV chanel, and
he decided to sing along with musicians in bars. After three years, he was in the first part of Ilène Barnes. That was when he understood that everything in music is reachable. Tias developped his connections and included new influences in his music, mixing jazz and American folk music. Thus, he started his career as a professional singer in local festivals, cultural associations… His talents were widely acknowledged by professionals and it stimulated him still more in the expression of his emotions.

Concerts after concerts, his songs, his voice and his presence on stage have touched people’s hearts. In 2013, he recorded his album “Aster Nous l’est là” and he decided to move back to Reunion Island in order to work as a full time professional singer. The first titles of it, mixing together jazz, pop, maloya in English and Creole, are the result of an ultra-multicultural universe that he intends to develop in further albums.

Tias has a wide audience and pays particular attention to his values. He is now preparing the release of his second album in 2017 thanks to his connections with national artists.

Tias’s voice makes us travel, his catchy lyrics deal with Love and with the emergency to live.