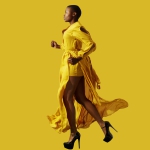 Zoe Modiga was born Palesa Nomthandazo Phumelele Modiga in Overport, Durban and raised in Pietermaritzburg. Over the past few years, this singer-songwriter’s talent has opened a number of doors in the music industry. Zoe has been fortunate enough to be part of celebrated festivals such as the Aardklop Festival, Artscape Youth Jazz Festival, UCT Jazz Festival, Joy of Jazz and The Cape Town International Jazz Festival and the winner of the Jazz Category of the SAMRO Overseas Scholarship Competition 2015. On these respected platforms she has had the privilege of sharing stages with the likes of Lira, Ladysmith Black Mambazo, Louis Maholo, Gloria Bosman, Matthew Gold, The Kiffness, Breakfast Included, the Frank Paco Art Ensemble, Mark Fransman, Sibusiso Dhlamini, Marcus Wyatt, Benjamin Jephta, Tshepo Tsotetsi and many more.

Despite sharing the stage with a number of performers, Zoe’s pursuit for her own identity became a strong force in these collaborations. She aspires to pursue a multifaceted career where her singing, songwriting and performing is challenged, revered, inspired and influential. This identity within her music attracted the ear of a number respected recording artist.

Zoe won the SAMRO Overseas Scholarship Competition for singing, was in the TOP 8 of The Voice SA, Season 1, sang “Amazing Grace” under the film scoring of Kyle Shepherd in Oscar nominated movie “NOEM MY SKOLLIE” and will release her debut project in 2017, “Yellow:The Novel”.