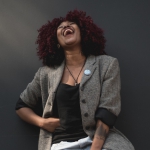 Nozuko Mapoma is a South African Afro Jazz singer, who responded to her musical calling in early 2006, a year in which she started channeling her vision through a number of collaborations, including “Blaq pepper” in 2006 (all my members were CJC students), “Soul Society” between 2007-2009, “LoveGlori” in a four year effort from 2010 to 2013.
In 2013 she formed her current Live performing band by the name “Zuko Collective – ZuCo”

The band
Zuko and her nine piece ensemble have since graced a numerous stages, a graced collection of appearances from festivals to private events. Some of her highlights include the MTN Bushfire in Swaziland, Basha Uhuru, Joburg Art
Fair and the Cape Town Nu World Festival, to name just a few. Zuko has provided entertainment at South African Fashion Week (SAFW15) as part of the Urban Zulu showcase event. Zuko with the ensemble has an album under her belt, Relationtrips. The album was launched at The Orbit in October 2015 to heart-warming acclaim and enjoyed raving reviews from numerous print publications. Following the launch, she embarked on a successful coastal tour travelling from cities and towns across Umzumbe in KZN, Durban City, Port St Johns, Port Elizabeth, Plettenberg Bay and the city of Cape Town beneath the Imposing Table Mountain.

The Solo
In 2016 she finally embarked on a long time wish, to record a solo album. The 13 song album is complete, and aptly titled Ndim’. Describable as a rich show case of her sultry over edges, a summation of the self-find journey, and the telling of lovely but at times teary day happenings in the life of.