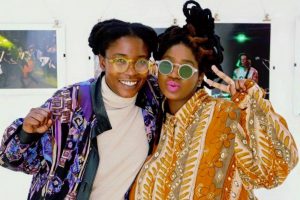 Ikati Esengxoweni is an alternative, urban traditional, world-music band, based in the Nelson Mandela Bay. Ikati Esengxoweni, translated in English is “Cat In The Bag”. The band was formed in 2015, by young hip creatives, Lark Wantu, on lead vocals as well as percussion instruments & Anam Manyati on lead vocals acoustic guitar & percussion. The live band, is experimental and often includes western and indigenous instruments in their sets, to set a different & liberal tone in their music. Instruments such as the violin, bass, drums, uhadi & kalimba, have accompanied the music and have added an element of surprise with each Ikati Performance Art Experience. In 2016, Ikati Esengxoweni was handpicked by IMEXSA, Independent Music Exporters South Africa, to perform, network and attend business conferences, around the world, in places such as Barcelona, Spain & Cannes in France.