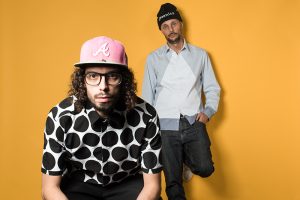 It’s 1987 when Crabbe gets into Hip hop and House music. The Paris radio-shows have no secrets for him at this moment. In 88 he grabs the first Ragga tunes of his life, he drops House for a while and buy turntables+mixer. In 1991 the emergence of raves in France and his love for Hardcore Hip hop (british included) join in a fresh new Jungle Tekno sound. From there he decides in 93 to go to London where his best friend had moved. He starts as a professional DJ in Paris in 95 spinning Jungle/Hardstep. 1992 to 1997 is an area feed of Rap, Jungle raves, House clubs, Reggae sound-systems…

As a teen Jess plays drums in a punk band, test a few Industrial and electronics experimentations. In 1992 after a period of Punk gigs and Reggae sound-systems, he discovers raves. The following year after tasting a little of NYC Hardcore he’s hit in the face by Chicago House and Ghetto traxx.

In 1996 the Daft Punk’s influence is predominant for both of them as the last kick in Dance music’s ass. (Crabbe was even featured on Daft’s album track ‘Oh yeah’) Irresistible. They decide with some friends to share this passion for House flirting with Techno, by promoting gigs and doing a radio show ‘Hometown’ was born. Crabbe also had a show with his junglists mates Rangerz Crew on the same radio FG.

In 1998 Jess and Crabbe did their first step in making music together, testing sequencing and sampling at a friend’s place. They got ideas to make the people dance, so they bought their first equipment. It’s in 1999, they met Emmanuel Chollet and his girlfriend Nad at a party who proposed them to join Fiat Lux Records. 4 months later the first J&C collaboration was released (‘Homebuilt Ep.’). Shortly after, the same year ‘The Big Booya Ep’ was out. Since then Jess & Crabbe spin at home and worldwide.

Today they released ten 12″s amongst one under the Dr.Dred & Spliff Shady a.k.a. and remixed different artists among them Daft Punk. Their mixtapes are considered classics and are still faved by loyal fans around the world. In 2010 Southern Fried re-released the Big Booya Yard Rock mix with new remixes. Since 2004 the punk-funk-disco-no-wave-jazz band 10LEC6 that Jess founded with Simon and friends has released a single and 2 albums. Crabbe is co-running B.Yrslf Division label with Daryl. In 2011 Jess and Crabbe launched the multiform Bazzerk project and it’s only about time to see new Jess & Crabbe productions now.