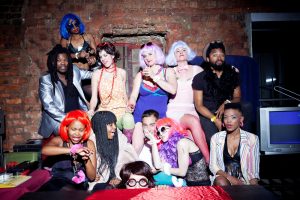 Motèl Mari are João Orecchia, Mpumelelo Mcata and Tshepang Ramoba. Shortly after landing in Johannesburg in 2004, Orecchia, a Brooklyn born and schooled wanderer, who wound up in Berlin as a teenager messing with experimental punk before moving years later to South Africa, heard some talk about a psychedelic afro-rock outfit called BLK JKS. They became fast friends and have been working together on projects ever since. Mpumi and Tshepang (guitar and drums respectively) contributed to João’s 2009 album, Hands & Feet, and would often join him on stage, adding thunderous beats and general bigness to the otherwise textural and floating soundscapes. Slowly they started becoming a band.