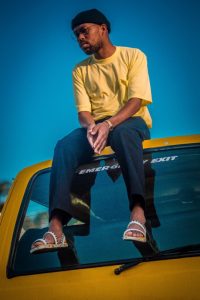 Robin Thirdfloor, aka Simphiwe Nyawose sparkled as a young alternative hip-hop artist in March 2014, when he self-released online the E.P ‘Sounds Empty Pockets Make’, which got more than 2 000 downloads in less than a month.

Hit single Confessions got playlisted on multiple radio stations including college radio station in Chicago (USA). Confessions and another track, Fly Away, were featured on SABC 1 drama series ‘Mutual Friends’.

After closing the main stage of the 2016 edition of South Africa ́s biggest hip-hop Gathering, the Back To The City Festival in Johannesburg, Robin Thirdfloor brought his sound to new levels in March 2017 with Somdanger, a neo-kwaito club banger paying tribute to the Durban nightlife with a video shot in his hometown Umlazi. This led him to be one of the few South African artists to be selected for the official showcase of SWSX 2017 (Austin-Texas, USA).

Mina Nawe is the first single of Robin ́s EP ‘Bhotela’, recorded Swiss producer Dejot aka Dubokaj (Mouthwatering Records). In late 2017 Robin released his new EP titled ‘Bhotela’ as a Deezer exclusive and debuted at number 23 on the top 25 streamed albums in South Africa. A real talent to keep an eye on.